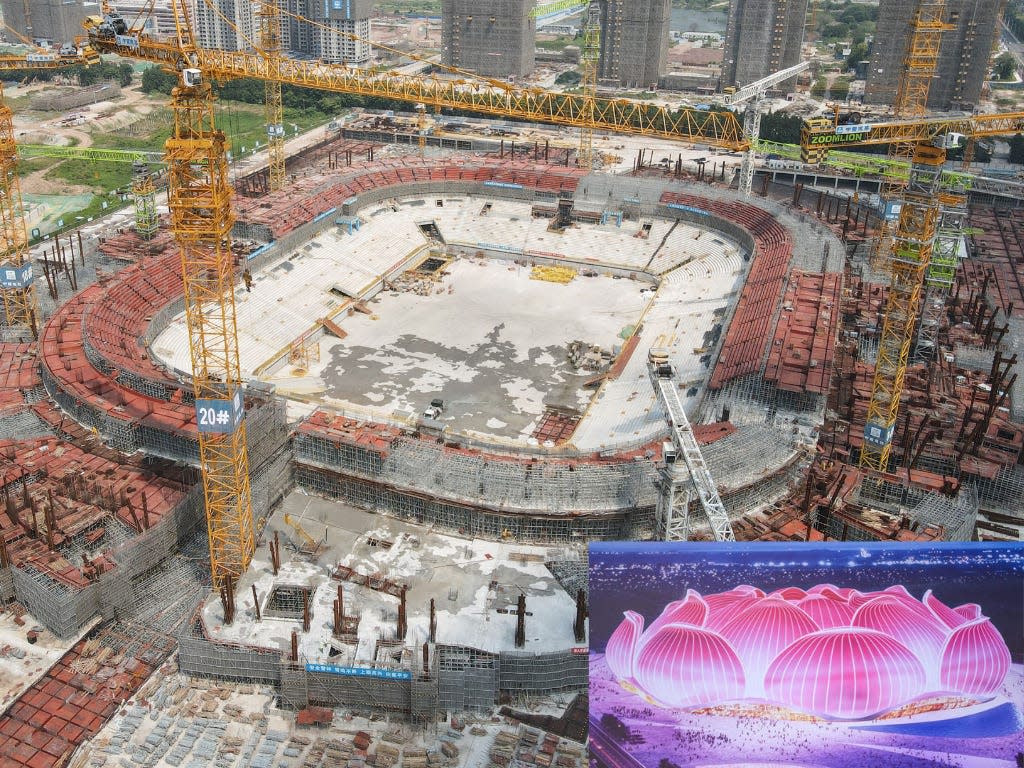 A massive lotus-shaped stadium in China’s southern Guangzhou province expected to cost $1.8 billion to construct is now partially built and in shambles.

That’s because the company behind the construction of this stadium is Evergrande, the debt-ridden Chinese real-estate giant. Work on most of Evergrande’s 800 development projects across China hit significant roadblocks over the summer due to the company’s looming debt.

Evergrande is teetering on the verge of collapse and has more than $305 billion in liabilities, more than any other company in the world, Markets Insider reported. The company’s failure to pay off its debts has caused tremors across regional and international markets, and some analysts have dubbed it China’s “Lehman Brothers moment,” referring to the collapse of the investment bank that was the tipping point for the 2008 housing crisis.

The stadium in question, Guangzhou Evergrande Football Stadium, broke ground in April 2020. The sides of it were designed to resemble the petals of a gigantic lotus, and it was designed to have a seating capacity of 100,000 and a floor area of 1.6 million square feet. If fully constructed, the stadium will rival the capacity of FC Barcelona’s Camp Nou, making it the biggest football stadium in the world.

At the time, Evergrande Group said it was intending to invest 12 billion Chinese yuan ($1.85 billion) into the project. It also intended to open the stadium by December 2022.

“Evergrande Stadium will become a new world-class landmark comparable to the Sydney Opera House and Burj Khalifa in Dubai, and an important symbol of Chinese football to the world,” said Xia Haijun, Evergrande’s vice-chairman, at the stadium’s groundbreaking ceremony last year.

Xia separately added that he hoped the stadium would be the venue for the Asian 2023 AFC Asian Cup, telling Chinese state-linked media China.org Evergrande was hoping to build “another three or five” stadiums in China to seat 80,000 to 100,000 people at each venue.

But with Evergrande’s towering debt, the progress of the Guangzhou stadium’s construction now hangs in the balance.

Evergrande said in a statement to Reuters that construction on the stadium is still “proceeding as normal and in an orderly manner.” However, the South China Morning Post saw only a couple of workers walking around the half-built football stadium when it visited the area on September 26. Reuters also reported that Guangzhou residents whom they spoke to said there were “hundreds” of people working on the construction site in June, but this has dwindled to a few people now.

It is also unclear what will happen to the majority-Evergrande owned Guangzhou FC, which was formerly known as the Guangzhou Evergrande Football Club. Its manager, Fabio Cannavaro, has left the club. Separately, a video of what appears to be the Evergrande Football School in Guangdong being trashed and left empty by its students has also gone viral on China’s Twitter-like platform, Weibo.

There might be hope that the stadium will, eventually, be built to completion. Reuters reported that construction firm Guangzhou City Construction Investment Group could be acquiring Evergrande’s Guangzhou FC Soccer stadium and the company’s other residential projects in the area.

Evergrande’s debt crisis has left many of its other large-scale construction projects at a standstill. For one, the Evergrande New Energy Vehicle Group facility in Shanghai remains partially constructed. Evergrande also scrapped a plan to list the electric vehicle unit on the Shanghai stock exchange, and it is unclear what will happen to the vehicle-making facility now.

Evergrande did not immediately respond to a request for comment from Insider.