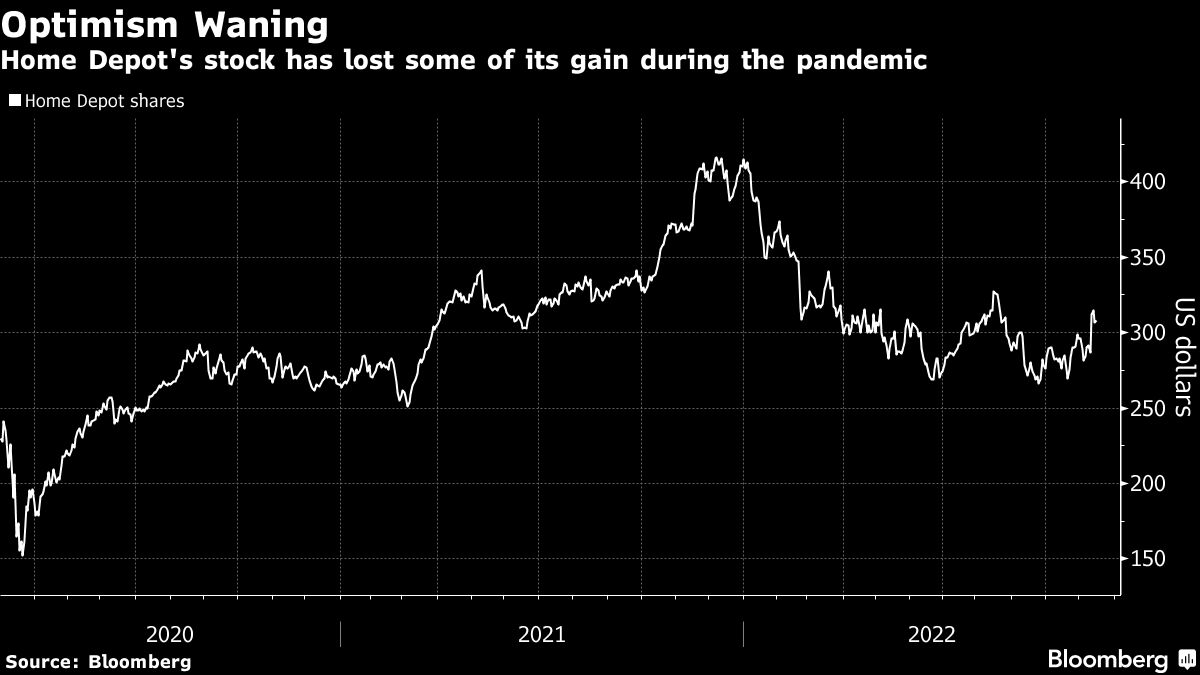 (Bloomberg) — Home Depot Inc. reported sales and profit that exceeded expectations as a backlog of home improvement projects that piled up during the pandemic continue to drive growth.

Most Read from Bloomberg

The company’s comparable sales rose 4.3% in the quarter ended Oct. 31, surpassing the 3% gain from analysts surveyed by Bloomberg. Earnings per share of $4.24 also beat the estimate.

At the same time, a decline in the volume of transactions suggests that growth is being driven by inflation rather than a jump in unit sales.

The average customer ticket was about $89 in the third quarter, almost 9% higher than a year earlier. At the same time, transactions declined 4.3%.

Earlier this year, the company expected that “increases in ticket would be directly and wholly offset by declines in transactions,” resulting in zero comparable sales growth overall, Home Depot Chief Financial Officer Richard McPhail said in an interview. Instead, customers have “proven more resilient, so those transactions have not offset ticket to the degree that we thought they would,” he said.

Home Depot’s fortunes are closely intertwined with those of the US housing market. Home sales have slowed amid a surge in interest rates as policy makers seek to blunt the highest inflation in decades. About four in five consumers now describe buying conditions for homes as bad, according to the University of Michigan’s consumer sentiment survey for November.

So far, though, Home Depot expects ongoing projects to prop up demand, regardless of whether Americans are moving or purchasing new homes.

“We’ll continue to take share in any operating environment,” Chief Executive Officer Ted Decker said on the company’s call with analysts. “We still feel the backdrop of housing, the fundamental shortage of housing in this country and the aging of homes is incredibly strong for our space in the medium to long term.”

McPhail said that higher mortgage rates mean that home owners are more likely to stay put in their homes and start new improvement projects there. Sales of building materials, plumbing, lumber, paint and hardware all had comparable sales above the company average, suggesting that large home projects like kitchen expansions are still underway.

Home Depot maintained its guidance for the full year, saying earnings per share will likely grow by a mid-single-digit percentage.

Cowen analysts led by Max Rakhlenko said Home Depot may be “better positioned into a more choppy backdrop given its higher Pro mix and ability to take Pro share,” referring to the company’s efforts to lock in lucrative business from professional contractors. The company’s decision to maintain its outlook is “likely conservative with an opportunity to outperform,” he wrote.

Home Depot executives noted on the analyst call that while both individual and professional customers both grew in the third quarter, pros grew “meaningfully faster.”

–With assistance from Marthe Fourcade.

Most Read from Bloomberg Businessweek

7 Tips For Exiting Your Real Estate Brokerage Without Burning Bridges

Dec 3, 2022 Rachel Lewis
We use cookies on our website to give you the most relevant experience by remembering your preferences and repeat visits. By clicking “Accept All”, you consent to the use of ALL the cookies. However, you may visit "Cookie Settings" to provide a controlled consent.
Cookie SettingsAccept All
Manage consent