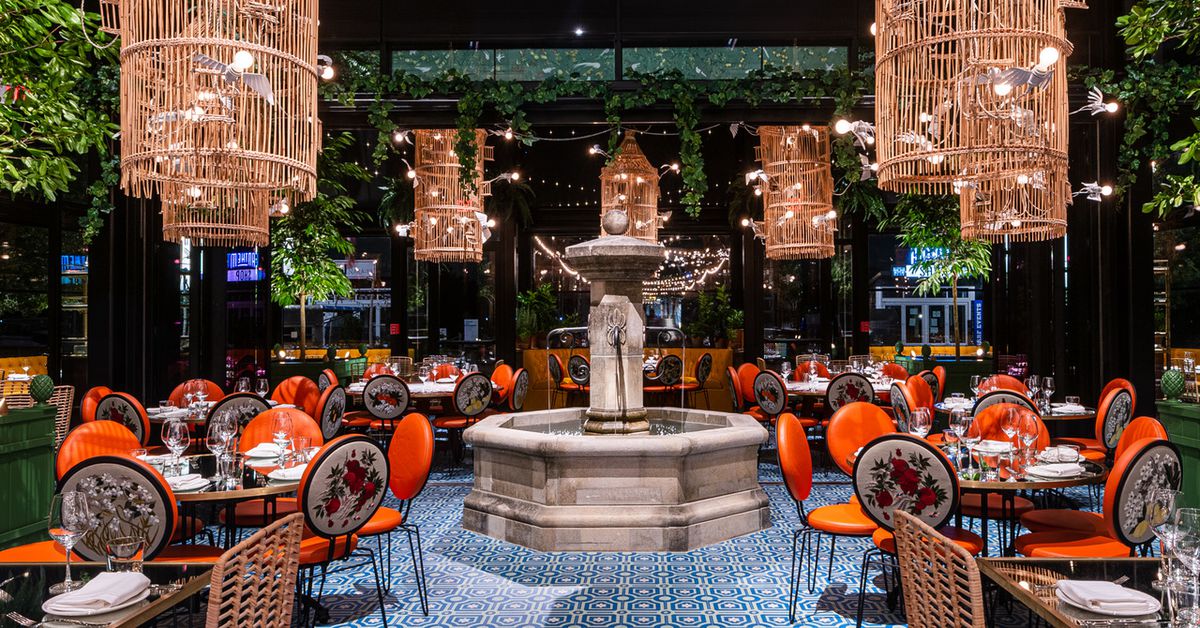 Inside the glass-enclosed building that serves as the crown jewel of D.C.’s waterfront Wharf development, a brand new Lebanese restaurant offers a visual feast before customers even open their menus. Within the 4,500 square feet that make up Ilili, there’s a large limestone fountain that first flowed in Provence, France, in the late 19th century. The bubbling centerpiece is one of the few pieces of the restaurant that wasn’t made in Lebanon. Citrus trees rise out of square, green-painted planters. Suspended bird cages full of steel doves with lightbulbs for heads float overhead. Daisy tiles covering the floor anchor the space with bright pops of blue and white.

“We tried to create an enchanted garden in the courtyard of a beautiful home in old Beirut,” chef and principal owner Philippe Massoud says. “This is not your Disney-style corporate restaurant. This is a restaurant with soul and passion.”

Ilili, one of the Wharf’s most ambitious projects to date, opened at 100 District Square SW on Thursday, October 7, with a menu full of modern meze, saffron-infused Negronis, and Chesapeake touches like blue crab falafel fritters that can be added to hummus.

Aside from its modern, glassy exterior, the standalone space is unrecognizable from its short life as Mike Isabella’s French-themed Requin. To capitalize on its million-dollar waterfront views, Massoud completely demolished the interior to open up a sightline from the entryway to pier. An outdoor addition with high-tech retractable windows provides front-row seats of boats bobbing on the Potomac River.

Maximizing ceiling height to 25 feet enabled the design team to go all out, which explains the jumbo bird cages that hover seven feet from the ground.

“We wanted to glorify them a bit more. It’s huge space, so the cages became our lights,” says architect Nasser Nakib, who collaborated with D.C.-based design studio 3877. Nakib jokes that unless Kareem Abdul-Jabbar walks in, “everyone’s safe.”

Nakib also designed the original Ilili, still running after 14 years in New York City’s Flatiron District. In that space, an amber-glowing dining room is dotted with handsome burgundy chairs that draw upon the Phoenician empire for inspiration. Ilili’s sophomore space takes a softer approach, harkening back to the innocent, childhood days when Nakib and Massoud grew up in Beirut.

“Tragically, Lebanon is heartbreaking story right now,” Massoud says. “It’s a country that is hostage to the militia [Hezbollah] and the mafia, being the political elite. They’ve robbed Lebanese people [of billions]. It’s bankrupt and people are suffering a lot.”

Wanting to support people back home, Massoud sought out Lebanese artisans to fashion as much of the decor as possible. That includes the copper base that runs under a 25-foot, marble-topped bar, hand-woven seatbacks in floral patterns, and floor tiles. Positioning the flight path of each hand-painted dove took two days alone, Nakib says. The winged symbol of peace is a theme from the start, with an image of doves and orange trees at Nakib’s stepfather’s farm welcoming guests near the front door.

Other personal touches from Nakib include a cheery, blue-and-yellow tile design in the bathroom that’s modeled after the wallpaper in his mother’s old bedroom. For a domestic touch, the restaurant used preserved wood from a Massachusetts tobacco barn to frame the bar. Indoor greenery may help diners offset the winter blues.

The 128-seat space seats 20 in a cocktail area and 10 at the bar. The Lebanese restaurant adds to a growing lineup of cuisines at the Wharf that includes options for Italian (Officina), Mexican (Mi Vida), Spanish (Del Mar), Pan-Asian (Kaliwa), and French (soon-to-open Bistro du Jour).

“The views are truly majestic and I think the fact it was unoccupied so long it created a bit of a dull corner,” Massoud says. “Now you have everything you need and don’t need to travel anymore — you can do one nation at a time.”

Massoud plans to take his staff on a trip to Turkey, Istanbul, Greece, and Lebanon to explore Mediterranean history and cuisine firsthand when post-pandemic travel conditions improve. For now, he’s pleased with how his new restaurant will impress visitors.

“With all the negativity we’ve gone through, I wanted to do something to flip it on its back, to come here and feel like you are being transported … [through] the space, food and service,” says Massoud.