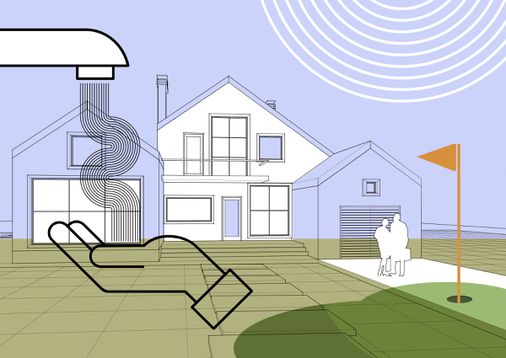 With our homes under the microscope, “someday” projects that could have otherwise lingered on the bottom of our to-do lists for years now need to have happened yesterday. “People are just looking at their homes and experiencing any dysfunction much more acutely and consistently,” White says.

Recent renovation requests tend to have one trait in common: the desire for more space. “People want more square footage,” says David Supple, chief executive of New England Design & Construction. “They aren’t used to being in a home for that amount of time with that many people. Even if they worked from home before, their kids weren’t there half the time.”

Bill Farnsworth, president of Custom Contracting in Arlington, has been finishing basements, attics, and other unused spaces into flexible home offices or playrooms for homebound kids. “People are looking at all the rooms, porches, and garages that could be used to escape to, work in, or go to school,” Farnsworth says. And with people stuck at home, he adds, face to face with all their stuff, mudrooms and organized storage have been particularly popular, too.

When Joia Spooner-Fleming and her wife, Laura, hired Supple to renovate their Jamaica Plain condo last summer, it was in large part a response to COVID confinement. The project addressed basic functional upgrades, such as a mudroom and central air, as well as some wish-list indulgences, including an en suite bath and upstairs laundry. They also broke down a wall to access the unfinished attic space atop the Victorian’s turret, creating a space-themed, rocket-cone-shaped playroom for their two kids.

The new playroom has been a hit with the kids and moms alike. But one part of the renovation was put off until this summer, when the family will be able to escape outside. “The kitchen is getting such heavy use during COVID,” Spooner-Fleming says. “Not having another place to go while the kids are in remote school, making three squares for four people, day in and day out — there was just no way we could ever function without a kitchen.”

In fact, kitchens were one of the few remodeling projects that seemed to slow down last year, Farnsworth says, though they’re starting to pick up again. “I don’t think people could bear losing their kitchen with everybody home,” he says.

Sweltering summer days at home prompted the couple to upgrade to an energy-efficient climate control system as well — to which they added an ultraviolet light air purifier and a hospital-grade air filter, for a permanent air quality upgrade. Supple says the pandemic has also informed people’s decisions around fixtures and finishes, prompting some to choose an antimicrobial metal surface like copper, for instance, or touchless entrances activated by motion sensors. “We’d never put in a touchless faucet before, but we have now,” Supple adds. “You’d more typically see that in commercial space.” (A June 2020 Kohler survey found 85 percent of Americans were “more interested than ever” in touchless fixtures in their homes.) And perhaps inspired by the great toilet paper shortage of spring 2020,

electronic bidet seats have risen in popularity, too, Farnsworth says. “We don’t put a lot of toilets in now without a plug right nearby.”

Energy efficiency has continued to be an important concern for homeowners — many of whom are now heating or cooling spaces during work hours when they might otherwise have been in offices. Massachusetts residents used 11.4 percent more electricity in 2020, adding roughly $245, on average, to a household’s annual bill, according to Cambridge-based Sense, a greentech company that makes smart devices to monitor home energy use.

“It’s hard to say whether the pandemic has made people more sensitive to the environmental impact of their homes,” Rachel White says, “but I can’t remember the last time I had to try to talk a homeowner into prioritizing energy and carbon as part of their renovation project.” Where she used to gently nudge homeowners toward sustainable choices, they’re increasingly already aware of technology such as heat pumps and induction cooktops. “It’s almost like a given now: ‘Of course we want to use energy more efficiently,’” White says. “They bring it up before we do, that they’d like to transition off of gas.”

The natural environment immediately around our homes has been getting a lot of attention, too. With vacation plans and athletic programs largely canceled last summer, and outdoor gatherings safer than indoor ones, people turned to their yards for fun, says Paul Austin, owner of Turf Prep in Woburn.

Before the pandemic, most of Austin’s business was focused on commercial and public fields. But when COVID hit last spring, forcing gyms and youth sports to shut down, people started calling about backyard basketball courts, putting greens, and ice rinks. “We transitioned from large-scale construction on sports fields to people’s backyards, like, overnight,” Austin says.

The most common request has been for a backyard putting green, Austin says, which can start at $5,000 and run all the way to $100,000 or more. “I love to golf, so when we do putting greens, we go all out,” he says. Some ultra high-end clients want to replicate a piece of their favorite course — the ninth green at Oyster Harbors on the Cape, for example, or an entire par 3 hole, including sand traps. Others are asking for golf simulators in their garages, complete with turf and nets. In the fall, Austin also installed hundreds of home ice rinks. “Getting outdoors has just been crucial for people this year,” he says.

Other homeowners are embracing their backyards in lower-impact ways, of course. Sally Muspratt, a landscape designer in West Roxbury, says she’s been receiving “urgent pleas” from homeowners seeking changes to their gardens. “Some just want to improve their views from windows and porches,” she says, while others are seeking new spaces to relax outside.

For one client, Muspratt created “an intimate sitting area, backed with azaleas and overlooking a new perennial garden.” A path through the lawn now leads to a woodland walk up a rocky hill behind the house, which Muspratt planted with native flowering trees, shrubs, and wildflowers.

Amid the pandemic, Muspratt has seen a pronounced interest among homeowners looking to connect with nature by adding native plants that will attract more songbirds and pollinators. “All my clients were interested not just in escaping the boredom of confinement,” she says, “but in using their yards to create a meaningful connection to nature.”

Home improvement projects have also been helping people reconnect with other humans. Farnsworth has taken careful precautions throughout the pandemic — and even before that, given all the dust a remodeling job kicks up. But when he meets with homeowners to discuss a project or to offer a quote, everyone wearing masks, it can still be comically awkward at first. “A lot of people haven’t had anyone in their house for months, and I’m like the first stranger that’s come inside,” Farnsworth says. “And either they’ll talk your ear off, or they’ll look at you like a deer in the headlights,” he jokes.

But as much as COVID has influenced people’s home improvement decisions, remodeling is, at its heart, an investment in the future — not an ode to the pandemic present. “I think people just want to keep thinking about closing the book on that chapter,” Farnsworth says.

Jon Gorey is a regular contributor to the Globe Magazine. Send comments to [email protected]