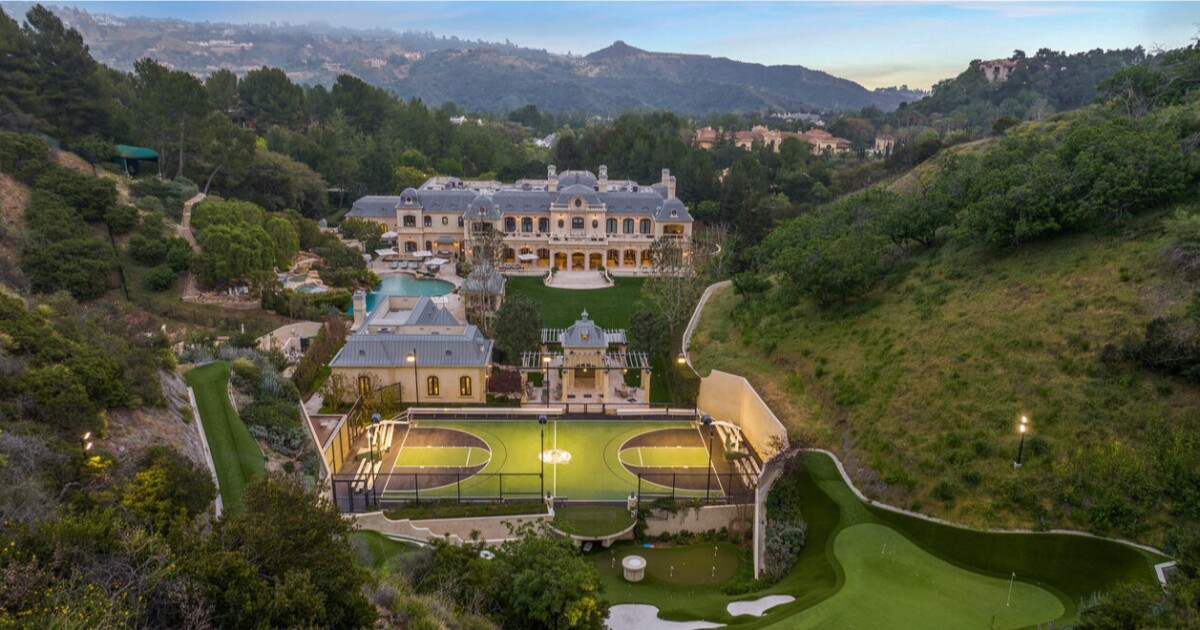 Welcome back to the Real Estate newsletter. This week, we’re looking at the highest of highs and the lowest of lows in Southern California’s diverse real estate market — and we also have an update on one of L.A.’s most magical institutions.

The highest of highs comes in the form of Mark Wahlberg’s Beverly Park estate, which he’s shopping around for $87.5 million. The movie star has customized the prized compound during his decade-long stay, and if he gets his price, it’ll be the second-biggest sale in Southern California so far this year.

In the still-incredibly-expensive-but-less-than-$87.5-million range, Matthew Stafford picked up two-thirds of Drake’s Hidden Hills party compound for $11 million. The Rams star paid way over asking for the side-by-side ranches, but he apparently didn’t want the “Yolo Estate,” the crown jewel of Drake’s compound, which features a grotto, a recording studio and a mechanical bull.

On the low end, we scanned all the listings for you and found five homes on the market for $500,000 around L.A. County. It feels odd to declare half a million as the low end of the market, but with the median home sale price hovering around $840,000, that’s simply our new reality.

The “magical institution” I not-so-subtly teased earlier is the Magic Castle, an uber-exclusive, invite-only clubhouse for magicians. About a year after the famed property was shaken by allegations of sexual assault and discrimination, the 114-year-old gothic manor is getting a new owner: a video game mogul and lifelong magician who has his sights set on preserving the historic space.

Lastly, we got a housing-themed transmission from columnist Patt Morrison, who honed in on Angelenos’ universal fixation on luxury real estate. Dotted with vintage postcards of famous estates, the piece serves as both an exploration of a shared obsession and a modern history of L.A.’s luxury market.

While catching up on the latest, visit and like our Facebook page, where you can find real estate stories and updates throughout the week.

Mark Wahlberg’s mega-mansion — an amenity-loaded compound complete with a golf course, a skate park and a grotto — just surfaced for sale at $87.5 million in Beverly Park.

If the movie star gets his price (or anything close), it will come in a somewhat distant second place among Southern California home sales this year behind “The One,” which was auctioned off for $141 million in March.

There’s a reason the mansion carries such a big price tag. At 30,500 square feet, it’s the seventh-largest house currently on the market in Los Angeles County. And while many of the top spots are occupied by boxy, modern spec mansions, Wahlberg’s place stands on its own as a European-style showplace that mixes Old World style with an abundance of modern amenities.

Wahlberg, who’s starring in the biographical drama “Father Stu,” bought the property for $8.25 million in 2009 and commissioned mega-mansion architect Richard Landry to build the home. Landry finished it five years later, fitting 12 bedrooms, 20 bathrooms and a myriad of lavish living spaces into the two-story floor plan.

From rapper to Rams star

A few months after winning the Super Bowl, Matthew Stafford is going on a spending spree. The Rams quarterback just dropped $11 million on two neighboring Hidden Hills homes owned by Drake, The Times has confirmed.

Stafford must have liked what he saw. He bought the larger home for $5 million, or $500,000 more than the asking price, and spent $6 million on the smaller one — more than double the asking price of $2.9 million. He now owns three homes in the star-studded neighborhood, after picking up a spec mansion last year for $19.6 million.

The contiguous properties make up two-thirds of the prized real estate package that Drake has been compiling for the last decade and shopping around for a combined $22.2 million after buying Robbie Williams’ Beverly Crest estate for $75 million. The third piece — a party-ready property known as the “Yolo Estate,” complete with a recording studio and a mechanical bull — is still on the market for $14.8 million.

For buyers on a budget, the Southern California housing market can feel impenetrable. Bidding wars and supply shortages have driven prices to historic highs, and according to Redfin, the median home in Los Angeles County sold for $839,000 in February.

Fortunately, The Times recently published “The Great SoCal House Hunt,” a comprehensive, step-by-step guide to buying a home in Southern California. It even comes with a Southern California-specific calculator that analyzes your finances and tells you how much you can afford (and what neighborhoods are a match).

Buyers in the $500,000 range may have to consider condos, townhomes or tenancy-in-common units in addition to single-family residences, but for those willing to get creative, there are still plenty of options. Here’s what $500,000 buys in five L.A. County communities.

In a move to preserve the historic Magic Castle in Hollywood, video game mogul Randy Pitchford is buying the famous home to the Academy of Magical Arts, writes Roger Vincent.

The purchase, which is expected to close by the end of the month, will ensure the prime property in the heart of the tourist district remains the academy’s clubhouse and performance venue, Pitchford said. The price has yet to be disclosed.

Pitchford is best known as the founder of Gearbox Entertainment Co., which developed the popular Borderlands franchise of video games. He is also a lifelong magician and member of the academy based at the Magic Castle, where he learned the tricks of the trade.

The sale comes a little more than a year after the storied institution was shaken by allegations of bad behavior, detailed in a Los Angeles Times investigation. In interviews with The Times, 12 people — among them guests and former employees — accused Magic Castle management, staff, performers and academy members of abuses that included sexual assault, sexual harassment and discrimination on the basis of race or gender.

L.A.’s relationship to its real estate

“Buying it, selling it, looking at it, yearning over it — a pastime, a hobby, and a preoccupation, and everyone has a story to tell. It’s a genre in reality TV. It was the founding impetus for our once-vast streetcar system, built at the outset not to carry people to where they wanted to go, but to where its real estate mogul-creator wanted them to go to buy his property.

“To live in Southern California without owning the walls around you is to feel, however slightly, short-stinted, cheated of its illusive promise of even a modest house for people of modest dreams and means: a cottage or a bungalow or ranch house, with a bit of yard for the leisurely life of California.

“There are places in the country, in the state, where ‘million-dollar house’ still sounds like a lottery-ticket fever dream, but L.A. isn’t one of them. Today, what was once a working family’s dream home, like the two-bedroom houses in the planned postwar city of Lakewood, is now a ‘starter’ house, priced at a lunatic $700,000 for under 900 square feet.”

If L.A. home prices have you down, there are plenty of places left with affordable real estate. MarketWatch compiled a list of five “surprisingly cool towns” where you can buy a home for $150,000 or less. Entries include Wichita Falls, Texas; Rockford, Ill.; Syracuse, N.Y.; Topeka, Kan.; and Little Rock, Ark.

The hot market makes sellers of us all, and pastors are joining the party. According to the Guardian, church leaders are combatting back taxes and declining membership rates by selling valuable land, and one church in Miami negotiated a potential deal to shed 2.2 acres of its 3.4-acre lot for $240 million.