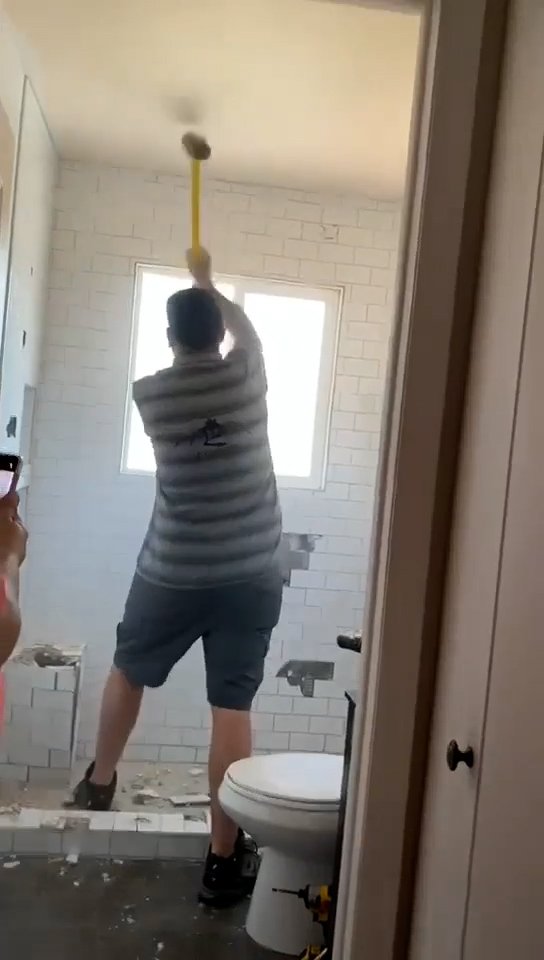 COLORADO SPRINGS, Colo. (KRDO)– A Colorado Springs woman says contractors she hired to remodel her bathroom shower came back into her home to destroy the project.

Amber Trucke paid contractors from Dream Home Remodels of Colorado $3,330 of an owed $7,555 to rebuild her bathroom shower. Trucke said she wasn’t pleased with the work the contractors had done and wanted to inspect it further before handing over the final payment.

That was apparently not reasonable in the eyes of business co-owners Terry James Gregory and Jordan Cazares, who returned to the home and destroyed the shower.

“I put weeks into this, thousands of dollars into this,” Gregory screamed as he took a sledgehammer to the tiles and walls.

Trucke lives with her dog and her roommate, who let the contractors back in on Saturday while Trucke was at work, figuring they were coming to pick up their materials.

“They showed up with just a crowbar, a sawzall, and a sledgehammer,” Trucke says.

Turns out they were doing more than just picking up their material.

In the video, a woman inside Trucke’s home can be heard asking Gregory to stop. He then replies, “Is someone going to pay me?”

“Watching it just brings tears to my eyes,” Trucke told KRDO. “It makes me sick, it makes me scared. This is more than just trashing my bathroom, my sense of safety is gone.”

The contractors from Dream Home Remodels of Colorado had done some other work in the house, fixing two ceiling fans and working on the back door.

But Trucke didn’t think they’d done a good job on the shower, or the door, and wanted to be sure the plumbing worked before paying the final $4,300.

“I wanted to be wowed and I wasn’t wowed,” she said. “But I knew she was coming back Friday to clean things up and I figured maybe I’d be more impressed then. So I was not going to pay them until I saw the actual finished product.

What she was wowed by though was how they demolished the shower, and how putting off the payment set off the contractors to an extreme extent.

Cazares says the story is fabricated and she’s received death threats since the incident. She sent this statement to KRDO:

“After several weeks of work for a customer, communication broke down at the end of a project. There was no displeasure expressed, and we proceeded to ask for payment on the project by the end of the day. Communication broke further after that and resulted in our company repossessing a tile shower. We regret that this contract went sour. It has never happened before and is not something that is made regular practice. There was several other projects included in the contract that she is also unwilling to pay for, including a vanity, mirror, light fixture, 2 ceiling fans, plumbing work, fixing rotten framing in her walls, and an exterior door replacement.”

Trucke insists she paid for those items, and she says she’s learned to vet anyone she hires before they come into her home.

“Obviously people are sometimes not what they seem, and that was certainly the case this time.”

Trucke plans to take the company to small claims court.

At least one other business with a similar name to Dream Home Remodels reached out to KRDO after receiving threatening messages from a stranger and confusion from existing clients when this story went viral.