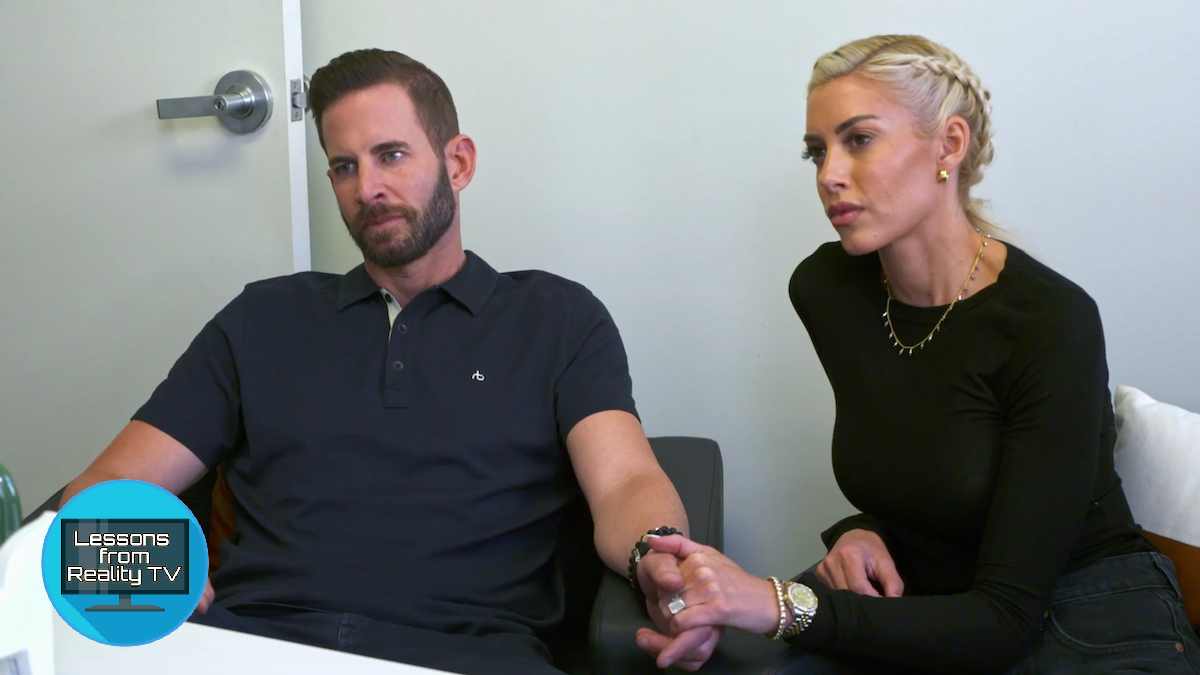 Tarek El Moussa has not been feeling like himself lately, and on the latest episode of “Flipping 101 with Tarek El Moussa,” we learn the reason. After his fiancee, Heather Rae Young, says his health has become “concerning,” El Moussa has some tests done and learns that he has celiac disease.

This means he should not be eating gluten, which is a huge change to his diet. Nonetheless, this switch helps him feel much better—and good thing, too, since he’s helping a couple of newbie flippers renovate a hugely expensive house.

In the Season 2 episode “Graduates Take On Studio City,” El Moussa meets with Patricia and Legacy, two dancers turned flippers whom El Moussa helped in Season 1. While these two were dating last season, their relationship is now strictly professional and they’re wondering if they should keep flipping together.

El Moussa knows firsthand that working with an ex can be tricky, as he still flips homes with his ex-wife and “Flip or Flop” co-star, Christina Haack. Still, it seems this couple’s rocky relationship may be the least of their problems.

These novice flippers have bought a house for $1,255,000, and while they set aside $300,000 for renovations, Patricia ends up spending a staggering $450,000. Her modern French farmhouse design looks good, but she adds a few questionable upgrades that put this flip at risk. Find out what happens, and get some smart take-home advice on what works—and doesn’t—when renovating a house.

Carry stone finishes from the outside in

In Season 1, El Moussa warned Patricia against ordering oak cabinets. He knew the oak would look dated, but Patricia didn’t listen to El Moussa’s advice, and in the end, she regretted it.

So, El Moussa is worried when Patricia says she has a “super unconventional” design idea for the kitchen.

“I really want to go for a more French modern farmhouse,” Patricia says. “This stone that we want to use outside, I want to use it as our kitchen backsplash.”

While she wants to go bold with this stone backsplash, the rest of her design is fairly safe, with clean white cabinets and white oak for the floors and island. Still, El Moussa isn’t sold on the idea.

“These aren’t materials I would normally put together,” El Moussa says. “If you want to play it safe, go with a different backsplash.”

Once again, Patricia ignores El Moussa’s advice and goes for the stone. However, Patricia is lucky this time, because the kitchen ends up looking amazing. The stone connects the inside and outside, and gives the whole house a French farmhouse style.

Pick a counter that complements the backsplash

To finish this kitchen, Patricia doesn’t want to choose a countertop that will compete with the stone backsplash. But she still wants the counter to look warm, welcoming, and unique.

“If you just stick to the gray and the white, it’s going to look too cold and contemporary,” she explains.

Wanting to go a little more classic, El Moussa chooses a beautiful counter with gold veining that is perfect in the space.

Remove the fireplace if it blocks a great view

When El Moussa first steps into this house, he sees the grand living room fireplace right away. It certainly needs some updates, but he knows it could be a great feature. However, when he visits the home later, he’s surprised to see the fireplace gone.

Legacy and Patricia explain that the fireplace was blocking the sweeping views of Los Angeles, and while a fireplace usually adds value to a home, this one was simply in the way. El Moussa thinks about it for a moment and decides he approves of the change.

“In this case, I would say a hundred percent get rid of the fireplace,” El Moussa says. “Because the value in this house is the view, and the fireplace was blocking the view, so I think it was a good call.”

Legacy and Patricia replace the fireplace with a new window, and it’s clear that they’ve made the right choice. The warm weather in Southern California doesn’t call for a fireplace, but the million-dollar views from this house are begging for clean sightlines.

Patricia’s kitchen design risk pays off big-time, but when she makes a bold choice for the secondary bathroom, she isn’t so lucky.

“It is reclaimed terra cotta,” she explains. “It actually comes from a castle from France from the late 19th century.”

Legacy is impressed, but El Moussa isn’t so sure, saying it looks like simple Saltillo pavers.

“I wouldn’t put this in my house,” El Moussa says. Patricia goes forward with the tile anyway; but once the bathroom is finished, buyers aren’t too impressed. One potential buyer even calls the flooring a “terrible idea” during the open house.

A covered patio pays off

This house features a large backyard with a beautiful pool, and while Patricia and Legacy are excited to update the pool, they can’t agree on what to do with the patio.

She wants to take the structure down and make the yard feel bigger, but Legacy likes the idea of a covering.

“I like the patio for a couple of reasons,” he says. “The first one is, it is hot outside. This provides shade, and if we maybe put a nice TV over there, this could be an indoor-outdoor area. I think it would be exciting for buyers.”

El Moussa quickly sees the value in a covered patio.

“I see this as a focal point, like I would love to see a modern fire pit,” he says. “I feel like whoever buys this house, they’re going to hang out right here, hang out with their friends, watch the kids swimming in the pool. I like the covered patio.”

They end up keeping the top but removing the walls. With a little paint and a new fire pit, this looks like a perfect place to lounge.

Do these ‘Flipping 101’ students learn their lesson?

It’s an amazing windfall. However, at the end of the flip, Patricia and Legacy decide to go their separate ways professionally. Still, Patricia says, they’ll “always have each other’s backs.”