The Bay Area’s hottest real estate neighborhood is a tiny waterfront community. Here’s what it’s like to live there 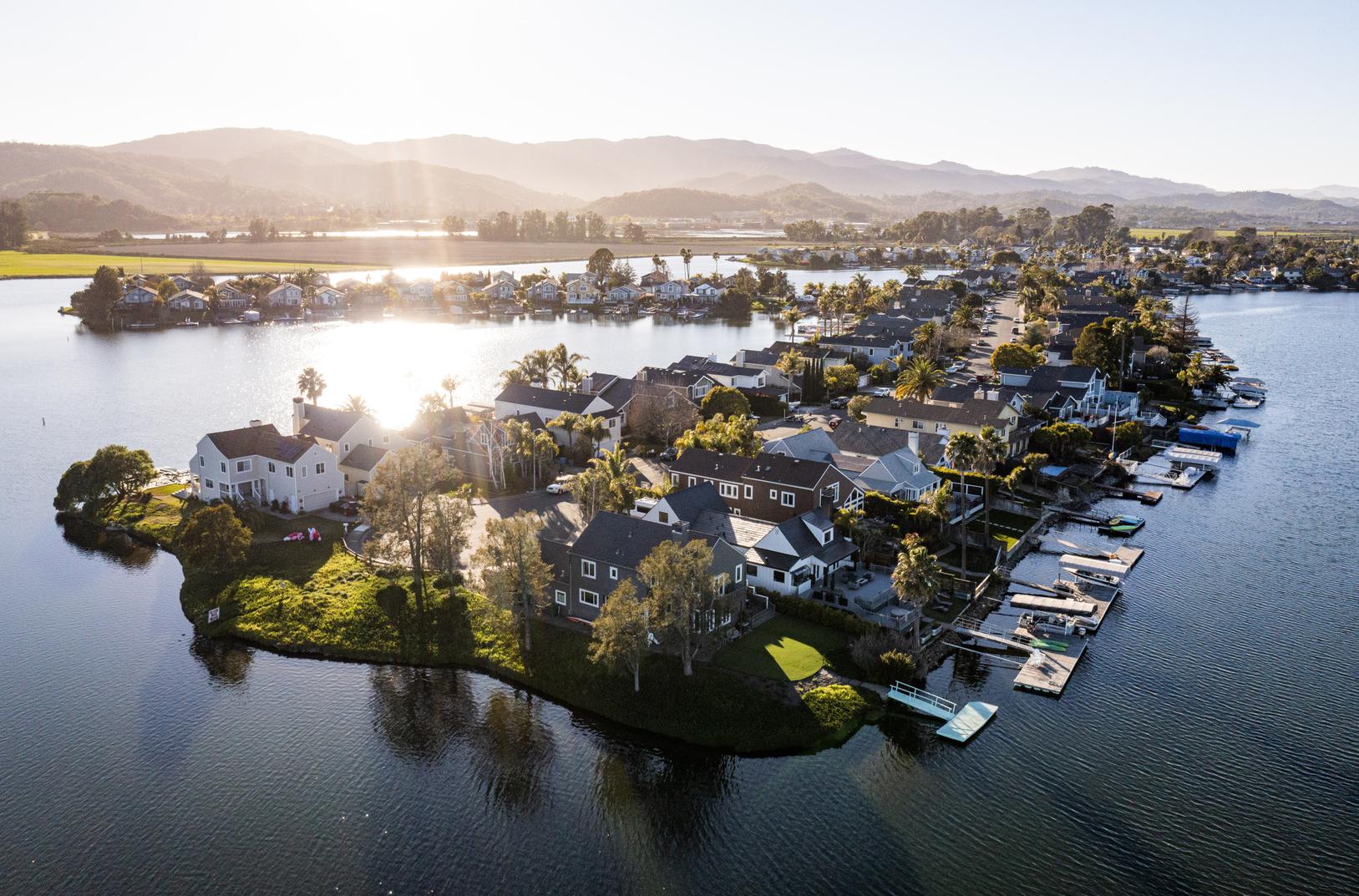 A historic brochure for Bel Marin Keys features the tagline: “Where fun and play come home to stay.”

The pamphlet, created sometime in the late 1950s or early ’60s as the community was first being built, marketed the southeast Novato development as offering a perma-vacation lifestyle in “sunny Marin County, refreshingly free from fog or smog.”

Today, the community of about 700 homes just off the San Pablo Bay waterfront retains a similar appeal for home buyers as what was promised back then: a relaxed atmosphere that can feel much more south Florida than Bay Area.

The growth in home prices there reflects a typical migration trend seen in the pandemic: growing interest in suburban locales where homes offer more space and access to the outdoors.

In Bel Marin Keys, the outdoors comes in the form of two lagoons and Novato Creek. Instead of typical grassy or tree-filled yards, backyards there feature decks and boat docks that overlook private, man-made lagoons. Hiking trails and cycling paths are nearby, yet the community is just minutes away from dining and shopping along Bel Marin Keys Boulevard and Highway 101.

Andrea Kraemer, 48, is a Realtor with Coldwell Banker and has been a resident of Bel Marin Keys for 13 years.

“I was one of many people who didn’t know that the community existed,” she said. “We came on a random Sunday and saw an open house, looked at the property and put in an offer that night.”

Kraemer said there’s an “exceptional lack of inventory,” with homes going between $850 and $1,110 a square foot. As of last week on Zillow, only one house in Bel Marin Keys was listed. The house, priced at $1.95 million, last sold for $1.2 million in June 2019. But as of Tuesday morning, even that one listing was gone.

That combination of factors — a low supply of homes in a unique, more affordable area — is likely the main reason the area has seen outsize growth in home values, even over other Bay Area neighborhoods whose popularity has exploded in the pandemic.

Longtime residents say the low inventory is, in part, because Bel Marin Keys residents tend to buy and stay put. But it’s also cyclical, and the turnover process has sped up during the pandemic.

Kraemer said the all-time high sale in Bel Marin Keys was $2.8 million in July 2021, an off-market sale for a home that was completely renovated with blown-out walls and floor-to-ceiling windows. She recently sold a fixer-upper for $1.25 million.

Longtime Novato Realtor Sylvia Barry said that before the pandemic, people in San Francisco usually looked to the area to expand. But more recently, more people from the South Bay have been scoping it out.

She said Novato is overall less expensive than other parts of Marin County, and you get the benefit of more open space with big lots and large yards. And because of widespread remote work, the commute from Marin County is no longer an issue.

“When you have a bigger buyer pool, it brings the price up,” she said. “People want to have more room.”

Madalienne Peters, 75, has lived in Bel Marin Keys since 2004. She and her husband didn’t even know they could swim in the lagoon until they moved in, and now they also kayak and paddleboard. She said she’s not surprised people are looking to Bel Marin Keys, especially if they work from home and no longer need to remain close to downtown San Francisco or Silicon Valley offices.

“What’s surprising is the property values stayed so modest for so long,” she said. “We’re not like other areas of Marin, definitely not well-known. But I think people understand that living in Bel Marin Keys is a good choice.”

Construction of Bel Marin Keys started around the late 1950s and advanced in phases. At the time, homes were advertised for an “unusually modest cost” starting at $26,000, with a choice of 80 exteriors and 10 floor plans. Man-made lagoons were added sometime in the 1960s, and homes continued to be built into the late 1980s.

Kraemer said a fifth phase of Bel Marin Keys was never built, and now it’s a wetlands area that residents call the levees, with “beautiful open space.” That has made the community a sanctuary for wildlife, brimming with waterfowl, fish and the occasional river otter.

The old 13-page brochure for Bel Marin Keys boasted planned amenities including a yacht club, shopping center, golf and country club, riding academy, and a proposed rod and gun club for fishing and hunting. Only the yacht club came to fruition.

Residents say it’s a more casual and family-oriented club than what one might imagine, hosting parties and events year-round, including a public Fourth of July fireworks show.

Jeffrey Martino, 61, has lived with his family in Bel Marin Keys for 25 years. He and his wife, Diane, love boating and raised their daughters to love being out on the water, too. He said most of the homes are traditional compared to newer properties around Novato, but it’s the water and access to nature that’s the main draw.

“I try to imagine someone looking for a home and why they would want to spend $1 million in another part of Novato, when they can get a home in Bel Marin Keys for relatively the same price and be on the water,” he said. “I have always thought Bel Marin Keys was undervalued for many years. I don’t think you can really put a price on the water lifestyle.”

According to the 2019 American Community Survey from the U.S. Census Bureau, the census tract for Bel Marin Keys shows a population of just over 1,600 people. It’s a tiny community, and one that is, in some ways, an exaggerated microcosm of Marin County’s demographics.

Marin is known as being populated by affluent, mostly white families and older people. Bel Marin Keys’ population is 83% non-Hispanic white, compared with 63% for all of Novato and 71% for Marin County.

Martino’s daughter, Lindsey, 21, said that as a kid growing up in the area, she and her friends would joke that Bel Marin Keys was like a retirement community.

She remembers kayaking to the wetlands where she would fill a 5-gallon bucket with lost golf balls and keep them as souvenirs.

Amy Khan, 40, lived in San Francisco for most of her adult life. When she and her husband had their two boys, they needed more space. The couple enjoy going up to Wine Country, and always noticed an exit for Bel Marin Keys.

“I figured there was probably water involved,” she said, saying that one day they decided to check it out. “It was different than anywhere in the Bay Area. We considered a lot of neighborhoods … but kept coming back to the idea that we could just walk into our backyard and it would be right on the water.”

She said there wasn’t a lot of availability then, but it was “definitely more inventory than what I’ve seen in the last couple of years.”

They lucked out and got the first home they put an offer on: a three-bedroom, two-bath mid-century modern home built in the 1960s. They had to do quite a bit of remodeling, and moved in in July of 2013. The commute to San Francisco was the biggest challenge, and Khan took Golden Gate Transit or, from time to time, the ferry.

“The biggest game changer was to forgo that commute in the last couple of years,” she said. “The pandemic was a challenge, don’t get me wrong, but honestly quarantining with a lagoon in your backyard and hiking trails all around made it much more bearable.”

Khan said when they first moved to Bel Marin Keys, she was a little disappointed there weren’t more children the same age as her kids, but now she sees that is changing. And while she misses living in the city from time to time, she sees the benefit that living there has had on her family.

“We’re in it for the long haul,” she said. “With prices rising pretty much everywhere in the Bay, there’s just not a better deal out there. I feel like my kids have gotten so many benefits from living in this community, and we’ll probably lose out going anywhere else.”