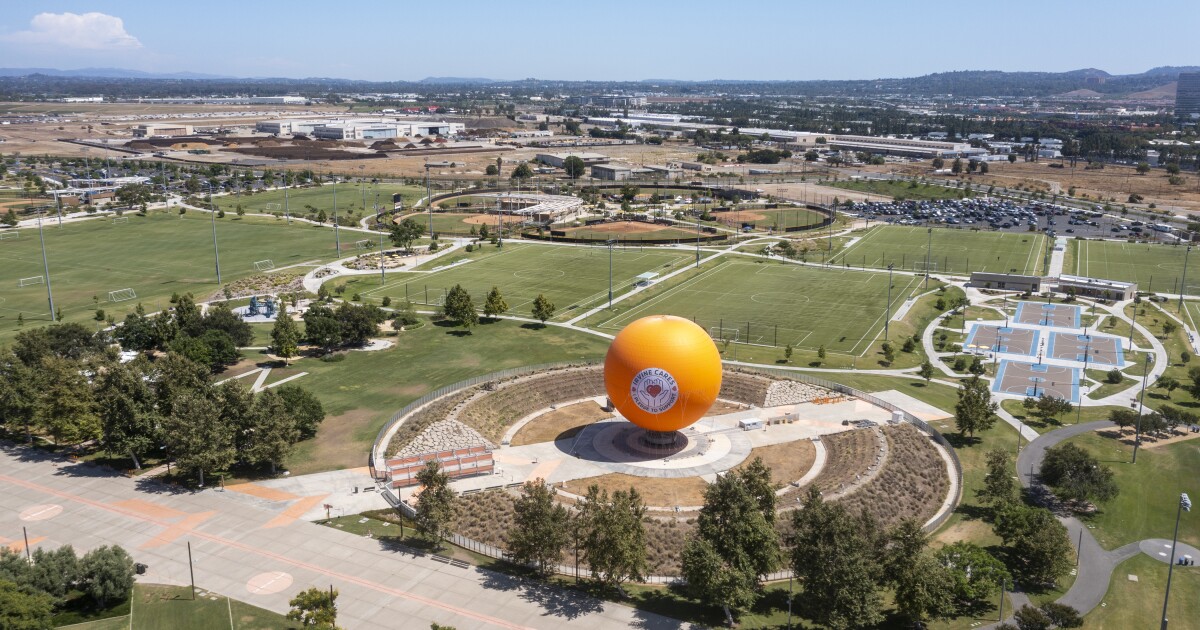 In the beginning, the Great Park in Irvine was envisioned as the second-coming of New York’s iconic Central Park.

Bogged down for years with accusations of cronyism and improper management, the park hasn’t lived up to its original billing. Now, the city of Irvine is considering an update of its master plan of the park.

Located at the site of the former Marine Corps Air Station El Toro, the park today has a large sports complex, a soccer stadium, an amphitheater, a skating rink and a large orange balloon.

“Really, when we think about the Great Park, it’s a big sports facility, which is great,” Irvine Vice Mayor Tammy Kim said Tuesday during a City Council meeting. “I know that there’s residents here and I know myself, really want to see the ‘park,’ in Great Park.”

City staff will spend the next two months seeking the public’s input on future plans for the park.

Outreach is expected to include in-person meetings at the Great Park, virtual meetings, meetings with homeowners’ associations, recorded videos and interactive online tools for people to contribute to the design process of the park.

Staff will also look for public opinion on two major projects in the park, a long-awaited botanical garden and the future of the FivePoint Amphitheatre, which is currently considered temporary. The city posted on Twitter earlier this week that there have been a spike in noise complaints tied to two concerts at the amphitheater. The city said it’s working to rectify the issue with the help of Live Nation, the operator of the venue.

During the meeting, the council began moving forward on a few projects in the Great Park, including the botanical garden.

“But I believe this council, all of us here, we have a once-in-a-lifetime opportunity to create something beautiful and awe-inspiring that can be appreciated now and for future generations,” Kim said. “I want to use that opportunity to build a world-class garden where people from all over the world and all over this country will want to visit.”

Following comments from community members in favor of the garden, the council provided direction for city staff to find a location for the project.

“I hope that today’s meeting leads to a final site designation and path to construction of the long-promised and much-desired, world-class botanical garden,” said Teena Spindler, president of the nonprofit Great Park Garden Coalition. “As you know, the garden has been in the plan since the very beginning in the original master plan, and has been confirmed through public outreach surveys over the years.”

Mayor Farrah Khan suggested that the garden could go in the park’s planned Cultural Terrace, a 236-acre portion of the park. On Tuesday, the council approved a contract with the IBI Group, an architectural service company, to help with the development of the terrace.

Also at the meeting, the council considered whether UCI Health could be a sponsor of the Great Park. Under the proposal, the organization would pay the city about $5.7 million for a 10-year agreement. Ultimately, the council decided to reconsider the item at a later meeting after several members expressed concerns about the proposed sponsorship.

Councilman Anthony Kuo was concerned that the exclusivity part of the sponsorship would inhibit the city from entering into agreements with other healthcare groups. Kim agreed with Kuo and suggested that the deal didn’t bring in enough money for the city, considering it’s in a big media market.

“We look at this and we think, ‘Oh, it’s a lot of money,’ but it actually isn’t compared to what they’re getting,” Kim said.

The public voted to turn the military base into the then-named Orange County Great Park in 2002. The city had big plans for the park, but they never came to fruition.

In 2013, Irvine hired Hagen, Streiff, Newton & Oshiro (HSNO) to conduct an investigation into why more than $250 million was spent to develop 88 acres of the 1,300-acre Great Park.

For years, the Great Park was mired in controversy, with residents claiming it hadn’t remotely met expectations as the so-called Central Park of the West.

Three grand jury reports were produced regarding the park in 2006, 2010 and 2015. The first investigation criticized city officials for a lack of transparency, while the second questioned the financial structure of the project. The third concluded that “from the outset, the project was poorly managed and did not follow conventional principles,” and “there seemingly was no effective oversight over invoices, contract compliance or quality control.”

HSNO conducted an initial audit for $240,000, then withdrew it in 2015 and replaced it with a second audit. Costs climbed to $1.7 million. HSNO’s final report concluded that the project was embroiled in financial mismanagement, leading to the waste of tens of millions of dollars between 2005 and 2012. Findings included that former Mayor Larry Agran, then chairman of the Great Park Corp., misled the public, beginning in 2006 with an understatement of the cost of the park. Agran currently sits on the City Council.

The saga continued in 2020, when HSNO surrendered its accounting license after a legal battle with a state oversight agency that claimed the firm “failed to comply with professional standards, engaged in numerous acts of negligence, and disseminated false and misleading information.”

Most recently, homeowners in the Great Park neighborhoods have expressed disapproval of special-assessment taxes they have to pay toward the development of the Great Park. In July, the City Council decided to drop “Orange County” from the original name of the park.

Support our coverage by becoming a digital subscriber.