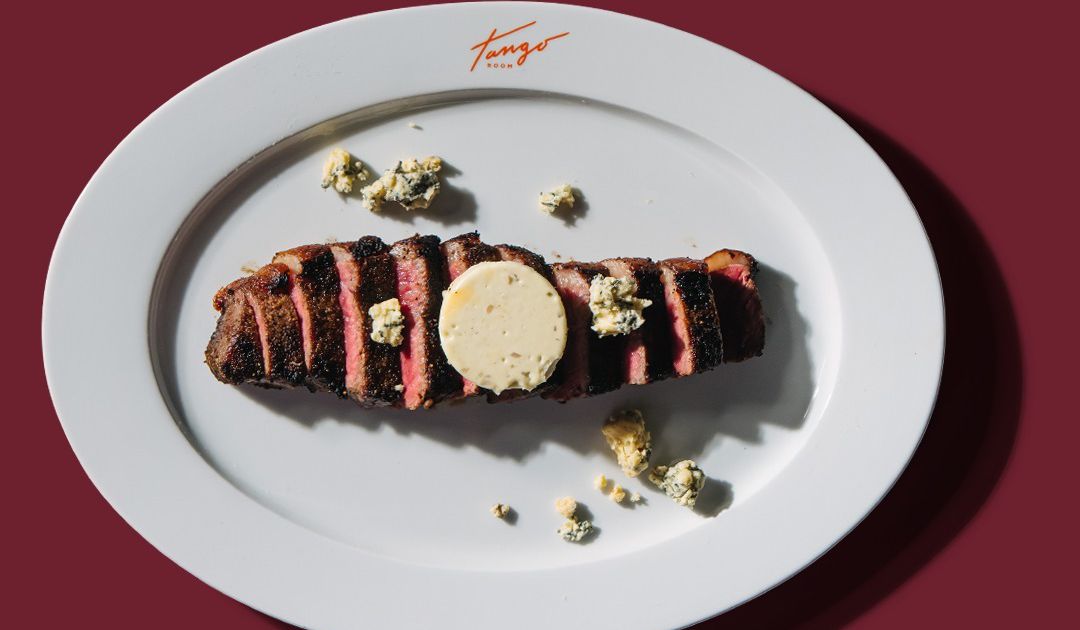 It popped up quietly, after more than a year-long wait.

We named it one of the most exciting restaurants to open in 2020, but that didn’t happen.

It was expected to open in April 2020, in place of FT33, chef Matt McCallister’s inventive restaurant that closed in 2018. The Hi Line Drive restaurant is in new hands now: Tango Room comes from Headington Companies, the group that owns the Joule Hotel, cocktail bar Midnight Rambler, bakery and grab and go shop Commissary and others, along with Southern restaurant The Porch on Henderson Avenue in Dallas.

Tango Room is the fanciest restaurant in the Headington portfolio, now that downtown Dallas restaurant Mirador has closed. Tango Room has its own sexy approach as a modern steakhouse.

“We took what we loved about the quintessential steakhouse, and then gave it our own fingerprints: elevated, unexpected, thoughtful,” says executive chef Kylil Henson. He previously worked at Stephan Pyles Flora Street Cafe and Oak in Dallas and at DBGB by Daniel Boulud in Washington, D.C.

Tango Room’s upscale and exclusive ambience mirrors a trend of ultra-luxury we’ve seen at other new, high-end restaurants in Dallas, like at 17-course, 12-seat Japanese restaurant Shoyo; the $2,200 steak place Nusr-Et; and 49th floor Italian den Monarch. At all of these spots, prices can get sky high.

Tango Room is small — just 12 booths and a bar — and diners can order a very expensive dinner if they so choose. Caviar is priced at $250 and steaks can cost up to $105 per person. Add seared foie gras for $25 or lobster for $28. Large format plates, which feed several people, include a $195 porterhouse steak sized at 40 ounces, served with cauliflower gratin and horseradish cream.

Bar snacks are less of a splurge and show a more playful side to the restaurant. Lobster corn dogs go for $15 and duck wings cost $17.

We all should consider the Tango Burger, which is unlike many of the other bougie burgers in town — and there are many. This one is a dry-aged beef patty with yuzu aioli, IPA pickles, black truffle and a Swiss cheese called raclette. It’s $20.

Over the 17 months since Tango Room was supposed to open, the Headington team has reinvented the dining room. “You won’t recognize it,” says Michael Siegel, food and beverage director for Headington Companies.

The team has also done “lots and lots of wine collecting,” he says. The wine list was created by Simon Roberts, a co-owner of the restaurant and the owner of Graileys Fine Wines.

The group hopes Tango Room will feel like a secluded restaurant that was worth the wait.

“It feels part private club, part restaurant,” Siegel says. “When people come, they look around and say: ‘There’s nothing like this in Dallas.’”

How to Defeat Again Gloom With Interior Design and style

What Will Be Popular This Year

How to Defeat Again Gloom With Interior Design and style

Jan 28, 2022 Rachel Lewis
We use cookies on our website to give you the most relevant experience by remembering your preferences and repeat visits. By clicking “Accept All”, you consent to the use of ALL the cookies. However, you may visit "Cookie Settings" to provide a controlled consent.
Cookie SettingsAccept All
Manage consent