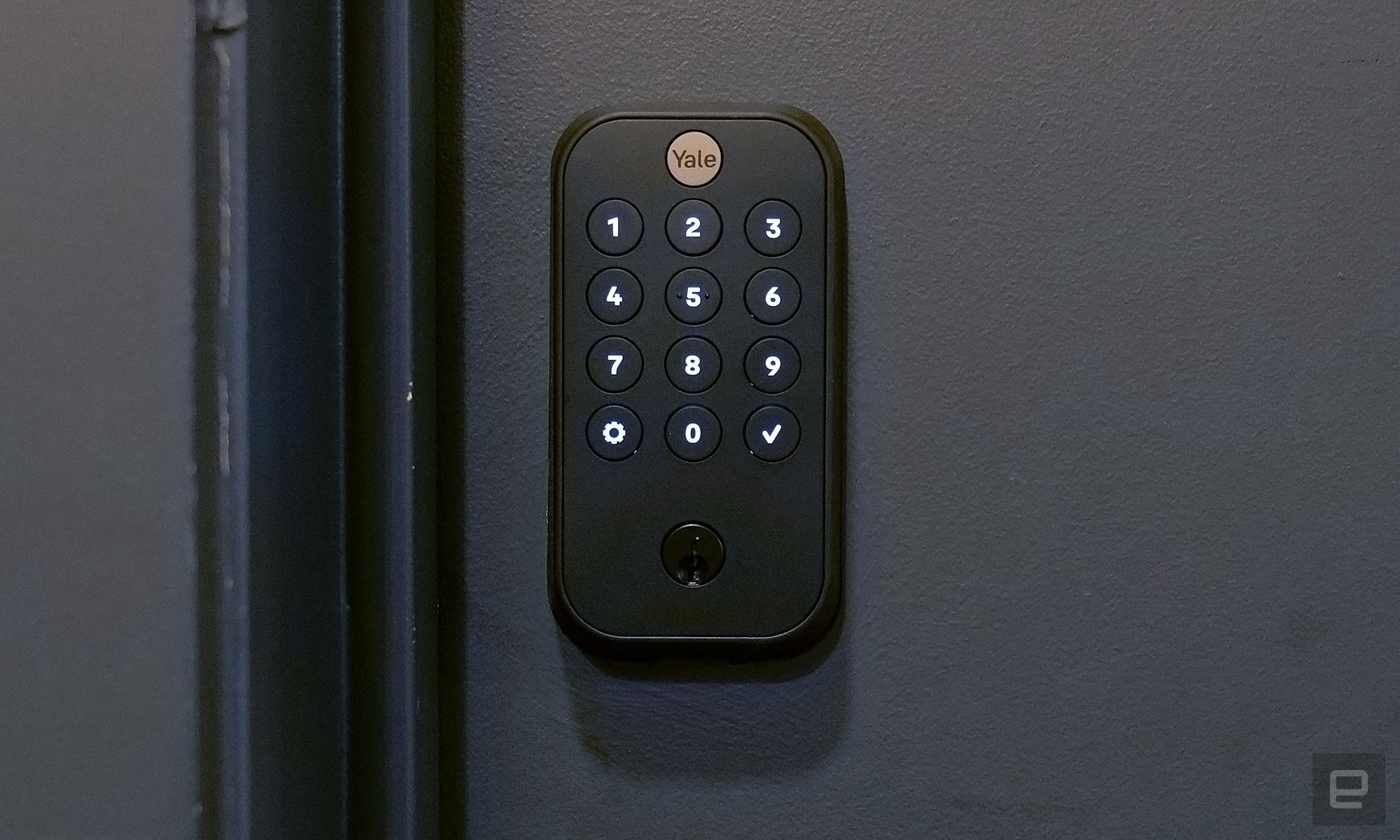 Everyone has different levels of interest when it comes to home automation, but I’d argue that a smart lock is one of the best and most impactful ways of upgrading your abode. And with the Assure Lock 2, Yale’s latest smart deadbolt is easy to install, it’s simple to use and it works with all the major smart home platforms (including the recently finalized Matter protocol). Also, because the device is available in a wide range of finishes and configs, there’s a good chance it’ll fight right in with your home’s design. In a lot of ways, it’s the do-everything smart lock.

The Assure Lock 2 is available in three finishes (black suede, bronze and satin nickel) across four basic configurations: a $160 keypad version with physical buttons that can be specced both with and without a physical keyhole and a slightly more sophisticated $180 touchscreen model, which once again supports both keyed and key-free setups. By default, the lock features Bluetooth connectivity, but for people who want deeper integration with smart home ecosystems, Yale sells modules that can add support for WiFi, Z-Wave and Matter. (Note: There are also versions of the lock that come with the WiFi module pre-installed starting at $240. However, while Yale says the Assure Lock 2 is fully compatible with the Matter standard, its Matter modules aren’t expected to be available until early 2023).

For the purposes of this review, I’ll be focusing on the keypad model with WiFi and a dedicated keyway, as it offers the best combo of traditional convenience and new school smarts.

I admit the idea of installing a deadbolt might sound a bit intimidating for some, but there’s really not much to be concerned about. Yale says the Assure Lock 2 is designed to work with most doors used in the U.S. and Canada, with support for boreholes up to 2 ¾-inches in diameter on slabs up to 1 ¾-inches thick. The only tool you need is a Phillips head screwdriver, so even mildly handly city folk like myself had no trouble screwing everything down in under 30 minutes. And that includes a small bit of troubleshooting I had to do with customer service.

The first step is removing your old deadbolt. After that, you can use the included installation manual or download the Yale Access app (you’ll need it later anyways) which features a really thorough step-by-step guide, complete with videos and visual aids. The box also includes a paper template to help you figure out the size of your door, which is important because there are a few packs of different-sized screws you’ll need to use depending on its specific dimensions.

Once the deadbolt is installed, the next thing you need to do is mount the DoorSense module, which is what allows the Assure Lock 2 to figure out when your door is open or closed. You can choose to stick it on the door frame near the lock, which just requires a couple of included screws and some pre-installed double-sided tape. Or you can go for a more seamless installation by hiding the sensor inside the frame of the door. But you’ll need a ⅝-inch drill bit for that so you can hollow out a hole for the DoorSense’s magnet.

The one part where the device got tripped up was during calibration, which is when the lock attempts to latch and unlatch itself in order to figure out when the door is properly secured. Unfortunately, even though my previous deadbolt was a WiFi Smart Lock from August (which like Yale is owned by Assa Abloy), the depth of my latch was a bit too shallow, preventing the lock from extending all the way. However, after calling Yale’s customer support, a friendly agent named Victor had me email a picture of my lock, which helped us sort out the issue. And after digging out the cavity for the latch a bit more, everything worked perfectly.

Once you get everything up and running, the Assure Lock 2 really shines. It’s like a Ronco rotisserie oven, you just set it and forget it. You can assign multiple entry codes and invite guests as needed via the Yale Access app. If someone uses the PIN you assigned them, the app records a log of when they entered. However, if you use the auto-unlock feature, you may never need to use the keypad at all. That’s because anytime you go more than 200 meters away from home, it uses Bluetooth or Wi-Fi to determine when you are coming back so it can unlock automatically as you walk up. And even though on Android devices you get a warning that the auto-unlock feature may be a little slow on certain devices, I never had any issues when using either a Samsung Galaxy Z Fold 4 or Google Pixel 6.

When you’re leaving, you can simply press the Yale logo to lock your door. Or you can be even lazier and enable the auto-locking feature. I have mine set to a latch a minute and a half after the door is closed, which is just enough for me to leave, walk to the trash chute in my building and get back before the deadbolt re-engages, but not so long that someone could feasibly sneak in behind me without being spotted. And because the deadbolt also supports voice assistant integration, you can unlock your door just by asking Google, Alexa or Siri. (For those worried about voice controls being a security issue, the system makes sure to ask for a PIN when using spoken commands. So don’t use them if someone you don’t trust is around.),

The unlocking options don’t stop there though, because for those with Apple Watches, you can simply move your wrist near the lock and use Bluetooth to let you in. And as always, you can simply open the app if you prefer a more manual approach. Most importantly none of these options failed me even once during testing. So you may never need to use a physical key again unless you really want to (though, I still like having one as a backup in case of emergency).

Another bonus of the Assure Lock 2’s new design, is that now it’s around 30 percent smaller than before. And when compared to something like August’s locks, it also sports a more traditional, so you don’t have to explain how to unlock the door visitors want to leave (which happens a lot more often than you might imagine). However, the downside is that because you’re replacing the entire deadbolt instead of adding a device on top of your existing hardware like with some of Yale’s rivals, the Assure Lock 2 might not be a great option for renters or people with strict HOAs.

Also, while I didn’t do this myself, if you want to upgrade to a new lock but really don’t want to change out all your keys, Yale even offers a service called Keyed Alike. For a small fee ($4), you can send Yale the code for you current lock’s cylinder and when your new deadbolt arrives, it will work with your existing set of keys.

Yale says the Assure Lock 2 with WiFi’s battery life is around three months, depending on how often you’re coming and going. And while I was initially a bit disappointed that the lock relies on four disposable AA batteries, Yale says that due to fire safety regulations, the company isn’t allowed to use rechargeable cells. You can put your own rechargeables in if you really want, but if anything goes wrong, that’s on you. Oh, and for anyone who goes with a keyless model, in the event that the lock’s batteries die while you’re out, you can tap a 9-volt battery on the contacts on the underside of the housing, which gives the lock just enough juice to let you in.

With the Assure Lock 2, Yale has created a smart deadbolt that really covers all the bases. You get four different configs in a variety of finishes. And thanks to compatibility with a wide range of standard door sizes, there’s a high chance it’ll fit right in on your home. So while other smart locks offer similar features like auto-unlock and the ability to detect when your door is ajar, they often don’t provide the flexibility of both keyed and keyless options while also lacking support for all the major smart home protocols (WiFi, Z-Wave and Matter). But my favorite thing about the lock is that it accomplishes what every really great smart home device should do: it gets out of your way. Once it’s installed and configured how you like, you don’t really have to worry about it again. The Assure Lock 2 makes it easier to track and control who’s going in and out of your house and if you’re looking at getting a new smart lock, this one needs to be at the top of your list.

All products recommended by Engadget are selected by our editorial team, independent of our parent company. Some of our stories include affiliate links. If you buy something through one of these links, we may earn an affiliate commission. All prices are correct at the time of publishing.

A Finish Tutorial to the Greatest Wise Household Equipment for 2023